Memories Maketh up Our Minds: Part I 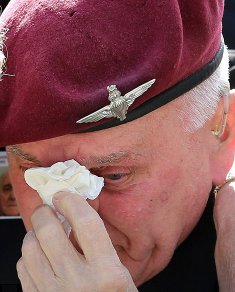 Are you thinking what the red-beret-wearing men were thinking?

How could you or I possibly be thinking what those men last week were thinking? Our blog-reading generation can only relate to what we may have read, history text books perhaps and the odd movie or two. Some of the later scenes of Atonement (a 2007 British drama film set in the War, based on Ian McEwan’s 2001 novel of the same name) endeavoured to show the horror of the rescue landings on the beaches of Dunkirk to recover the British and French soldiers as Germany conquered France. Visit the secret tunnels close to Dover Castle, and with the modern audio-visual installation you may today sense something of the intensity of the bombardment and the noise.

When I visited, one account that struck me particularly, was of a man who went over in the many fishing boats to help, and worked so intensely he had assumed that the blood upon his flesh was that of the injured soldiers. Only later he realised that his exhaustive labours were inducing sweat of both ‘blood and tears (perspiration)’. The moving photo-journalism of the last week, of ancient men in red berets men, less than a decade short of receiving a birthday card from the Queen … well, one could make only the feeblest guesses of what their memories could be … of what they had seen and of what they had done to serve their country. The beach was a field of blue, white and crimson-red flags, lending metaphorical applause and a cheering ‘Thank you’. Seemingly those men had ‘survived’ and managed to thrive in spite of their memories. Many of their contemporaries did not manage to live lives on memories as painful and lost their minds to events that they could not comprehend and integrate day in and day out.

I remember some years ago attending an Anthony Robbins seminar called Date with Destiny in the USA. By chance, amongst some five hundred attending delegates were two Veterans of the Vietnam War. Both men reported undergoing a very similar and highly significant experience (as far as two intensely personal experiences can be similar), during their time in action. A grenade had exploded alongside both the Veteran and a fellow soldier. In each case the body of the other soldier had in the very moment shielded the surviving Veteran from injury. In each incident the ‘brother’ in action had died. Tony continued to speak of how the memories of each incident had affected the man’s destiny, but in different ways. One man reported holding his friends’ life up as the reason for him now to live his life fully in order to achieve much that would celebrate both their lives. The memory of what had happened now gave grist to the mill of hard work and success of his life. The memory for the other man contributed to his having recurring nightmares where he re-played night after night the horror of the detonation and the destruction of his friend. For one man the memory provided high octane fuel to motor his life. For the other the memory completely disabled his ability to even begin to get into the driving seat of his life.  Memories have a habit of sneaking up on you.

A few weeks prior to the commemorations to honour the men of the D-Day landings I found myself in the position of giving a short ten-minute presentation in the conference room of a hotel in Valletta, Malta. My presentation was due some forty-five minutes into the proceedings and I was aware of a growing sense of anxiety seeding within me. This seemingly indigestible feeling was a tad unusual given that the talk was short and particular to my work in hypnosis and therapy. I endeavoured to squash the feeling with a pain-au-chocolat, and a coffee top-up, at the same time re-tracing my memories as to what exactly was fuelling my disposition. Then I remembered that the last occasion I had delivered a talk in that particular arena was on the day of TEDx Valletta, 11th November 2011 ― the most important talk I have given, and I recalled that in no small way there was a risk to my reputation. Memories are the fuel upon which we run our lives, and they do have a habit of sneaking up on you.

Do you have memories that ‘stall’ your life or drive you to distraction?

While you think about that question, and before I introduce part two on this theme, you may wish to have the opportunity to watch TEDx Valletta… www.wholebeingtoday.co.uk/blog/tedx-valletta