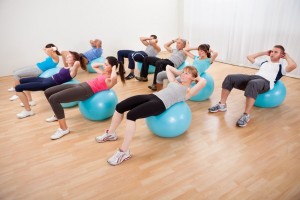 I doubt you were thinking what I was thinking!

I am sitting at dinner.  One of our group begins to speak about an exercise class called Fitball, expressing interest in who may be joining.  My mind makes a remarkable sprint to catch the word “ball”, and all that the word ball conjured up for me personally in the context of exercise and sport !  I acknowledged that I was not attending the Fitball class and went on to explain why I was not attending it.  I imagine when most of you think about Fitball you are thinking about the benefits of ball work—balance; strength, postural control, co-ordination and cardiovascular fitness, perhaps?  Hence you were not thinking what I was thinking as I sprinted for the ‘ball’.

Your starter for ten?  What was I thinking?

So, I’ll tell you what thoughts came into my mind.  I sprinted over to memories of sports and games at secondary school.  Hockey, netball, lacrosse, you name a ball sport and I did not come up to scratch in the eyes of any of the games teachers, and indeed not even my very best school friend.   Hands up if you were chosen to be captain of a games team at school!  Or, hands up if you were not chosen!  Hands up if you were never, ever chosen.  As a grown-up I am sure I could have improved but the attitude of the games teachers was such that I didn’t even make first base.  The social pressures associated with being good at sports were olympian.  And I always wondered where the ‘team spirit’ was supposed to come in?  I remember the first time the teacher announced, ‘In a moment I’m going to ask you to pick your team,’ and I felt a sudden inner pain, because of who was about to do the choosing.  My best friend quite excelled at sport, and was often called upon to select a team.  Ever since we met in primary school, we had chosen each other to share everything, and chosen each other first and fast.  Now Susan was to choose a netball team. She loves me … she loves me not. She loves me … she loves me not.  The two captains plucked the freshest, fastest petals from the assembled first-formers.  And when the ‘best’ and the ‘brightest’ were lined up, the few left behind were quickly chosen to conclude the exercise.  Then, at last, amongst the dregs of the straggling players waiting to be chosen, Susan chose me.  My perceived inability was affirmed again and again, such that when it came to tennis and squash my running was deemed comparable with the gait of a cart horse.  I can to this day recall a young woman feeling that particular rally at full force ― stronger than any ball.   Such was the uninspiring nature of school games teachers ― those who shall not be named.

Did you ever have to dress up as a gnome?

Many years ago, a client, let’s call him Jeremy, worked as a business financier and, following a company merger, he was looking for a new job. During the application process he found it ‘impossible to shut down his sense of worry’. He could find ‘no lasting comfort’, and eventually worry began to impact on his self-confidence. The negative messages proved overwhelming, and he found it impossible to counteract them. Definitely there was a gremlin somewhere in Jeremy’s mental mechanics. And indeed there was!  The spanner in the works was a memory.  This memory was the opinion of a healthy, self-aware, and opinionated nine-year-old who had been forced, much against his better judgment, to dress up as a garden gnome for an infant school play. ‘How stupid can you be?’, he exclaimed, ‘a garden gnome!’, and in his defence, ‘I tried to get out of it’, and finally concluded, ‘Once was enough!’

This mere sprite of a young lad was able to summon the sense of looking stupid, the sense of humiliation, and fear which collectively struck him down in a heart beat!  The memory was in many ways like a life sentence.  Moreover, although Jeremy protested that he had ‘tried to get out of it’, there was a sense of his being judged as not having tried hard enough—a sense that Jeremy still harboured a grudge against the youngster.   Indeed, he needed to work to bring himself up-to-date. The truth was he had long outgrown the garden gnome.  And yet he was still, in effect, wearing it in his psyche!

Feel like you have never achieved anything in your successful life?

Join the crowd.  There are so many highly successful, and highly motivated, success stories who carry this low-octane ‘life sentence’.  When a client makes a comment like this, even today my metaphorical jaw drops open wide.

What car do you drive?

Mercedes, Audi, BMW?  Really that isn’t the point.  Consider this: would your car start on fuel as dilute as you run your mind on?  Our memories are the ‘fuel’ that drives our subconscious mind.  So many of us hold on tap, memories in some areas of our lives that would not begin to start the engine of our car.   Many of us need a fuel change.

How did Jeremy transform the gnome costume?

Interactive hypnotherapy allowed Jeremy to come to an understanding of the ‘evidence’, in his successful life to overwrite the old patterns and memories and gain another perspective to view them from.  So he was able to experience the event differently.  Jeremy got to fill up his psyche with high-octane fuel and so get behind the steering wheel of the next chapter of his life.

Whether it is a memory of dropping the ball, or forgetting your lines, or spelling a word incorrectly in front of the class, or being found out … you can change that low-octane memory to your advantage and to one that is potentially going to get you started and driving, and appreciating your inner sense of va-va-voom to really empower your life.

For more information: Please see my list of published books

Read my description of hypnotherapy in London here.