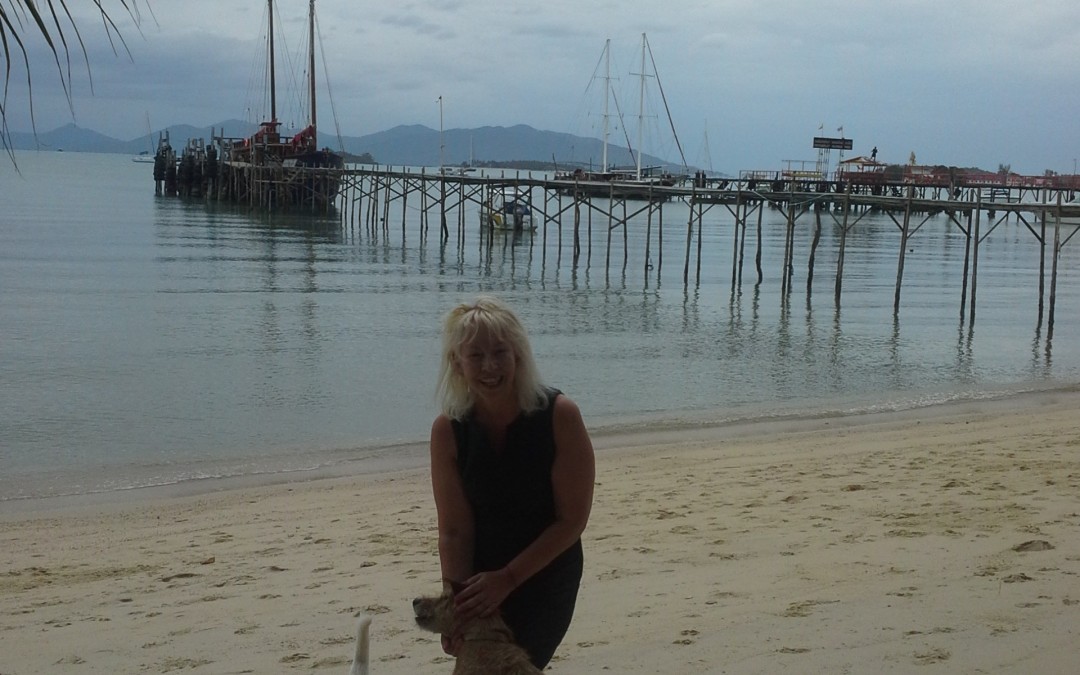 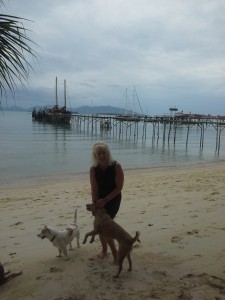 Do you ever remember your Bohemian self?

The Bohemian in me stepped back in time to a beach called Bangrak where once upon a time I escaped to recover from a broken heart.  I had booked my flight to Thailand for a date coinciding with the end of a work contract with IBM.  Those were the days when I was freelancing in the field of computer-based training, before hypnotherapy discovered me.  The universe had tested my resolve by brokering another contract close to the date of departure, but with a flight on the horizon, I drew a line in the sand: I crossed it with brave heart, and with my backpack filled to the brim.

Days of The Beach

When you travel east, it is difficult to be alone as there are like minds around you, who also have made their particular mark in the sand.  I recall, reluctantly, bidding farewell to three alluring travelling companions whom I had met on the plane.  This trio were itching to dip their toes in the promise of a utopian sea.  These were the days of Alex Garland’s novel ‘The Beach‘.

We travelled in an age of patience, post restante (a holding place at the post office for letters) and restraint.  We were not Tuaregs who could telepathically commune with the whispering winds.  Instead there was a notice board in a popular bar wherever you laid your backpack.  There was a hand-written note pinned upon it.   And then there was a willingness and the patience to wait.

The Calling of the Hills of Chang Mai, Thailand

The Capricorn within me wished to reach for the hills and for the stars.  This healthy, well-fatted ‘goat’ boarded the night train solo to Chang Mai seeking a Trek destined for the hills.  I joined a group organised by the Youth Hostel Association (YHA) and set forth with Tracker, leader and team-mates.  The tracker literally cut a path through the dense hillside vegetation as we followed behind, making our way.  Trust me, a cigarette was a useful friend.  With a cigarette I could release the leaches from my muddied and dusty limbs.  The weight on my back was lightweight and comprised essentials.  My body increasingly revealed my ribs.  I bathed under a hose pipe by the tribal well, and slept, bagged, on the boards of simple timbered hut floors.  I too then itched for the sea, but the Chang Mai hills were alive with the sound of tinkling bells.  They adorned heads, ample waists, and water-buffalo.  The hill-tribe peoples existed in harsh jungle, wearing vibrant costumes and with rugged faces … and, perhaps for the visitors, diligently smiling faces.  It was here that I forlornly realised Coke (coca cola, way back then) really was ‘within an arms reach of desire’.  The advertising mantra had managed to infiltrate, an otherwise primitive tribe.   However, I had made it.  I had touched briefly on the lives of the inhabitants and their habitats, my goat-like will had clambered to see. 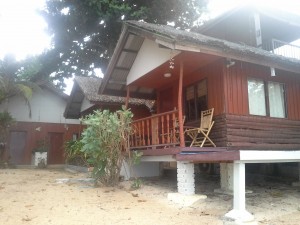 Digs and dining out in the Kaosan Road

Lighter in my body mass, and with my ribs showing through, I passed through Bangkok, on my return down from the hills, and resided in the Kaosan Road.  Kaosan was famous (and still is) as a one-stop shop to lather, to launder, and be at leisure.  For me, it was also a chance to eat.  Once handsome and now ravaged Vietnam war veterans had anchored their butts in the bars, like old sea dogs.  Today as I write, many are probably long gone or dead.  They spent their days spinning yarns as their own lives unravelled.  We travellers were held captive by their memories.  They were held captive by their memories too.  And then there were the drugs and oceans of beer.  Bangkok still breathes down your back ― the heat, the pollution, and the beat.  Cleaned up and fed, thirty-six hours later, I was on an overnight train to Hua Hin and then onward by boat to Ko Samui.   A boutique airline, and a runway was still many rumours and years away.

And so I landed one day, two weeks later, full of wonder on Bangrak beach.  I shared a hut with a woman I had met on the boat crossing.  We had a bed, a sink, a hosepipe shower, and close by to us a breakfast shack.  And before us the golden sand and the sea. We were in bliss and blessed.

The Beach and I’m back

By divine accident Booking.com has led me to The Full Moon Villas http://www.fullmoonresidence.com, and back to Bangrak.  I’m back in a beautiful room and in awe that I am footsteps away from that low-season deserted beach.  The Beach.  Bangrak.  I walk along the sand holding the hand of my bohemian younger-self remembering, with the friendly Moufrang, (the Manager, Khun Non’s friendly mutt), at my feet.  I pass one traveller and a Thai mother playing with her three very young children in the shallow sea water.  I discover there are two or three other small villa-like residences for travellers, and betwixt and between the private homes of savvy Thais (back then), a local family still holding on to their traditional Thai homestead, and a small gathering of  huts very similar to how I remembered them to be ― a community on stilts.

In the morning I find a breakfast place set back on the other side of the beach.  I imagine the road crossed through the stretch of beach.   In front of me is a small office, and then the golden beach.  I deliberately have chosen a cheap restaurant shack to re-connect and remember.  The menu still designates the breakfast choices as: American, Irish or French, and all still under 200 Thai Baht (approximately 5 euros).

The sea awaits my outstretched arms as pure now as then, on my days on The Beach.  And then, I set off to the airport that put Ko Samui on the travellers’ map. 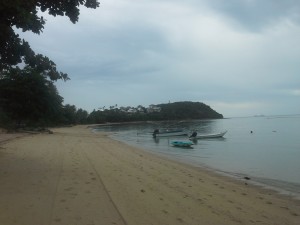 Read my description of hypnotherapy in London here.