Sky High Talking on This and That (Part II) 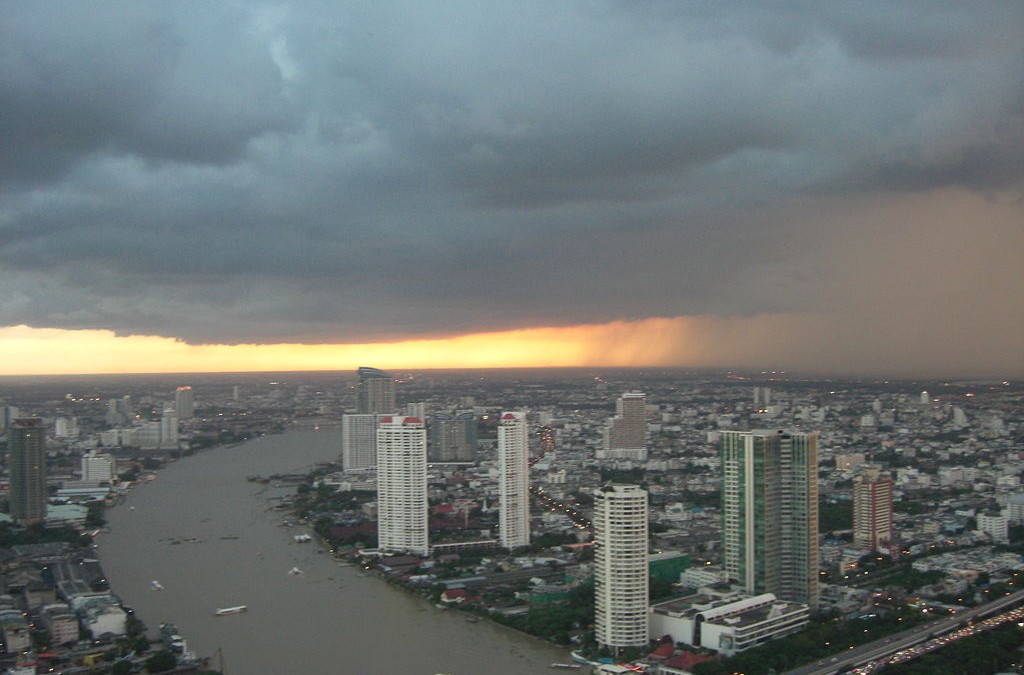 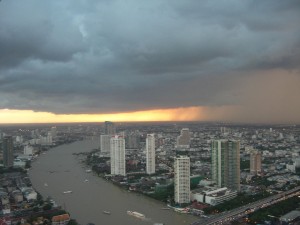 Bangkok, the Beanstalk, and Breakfast continued…

Still in Bangkok and still eating breakfast in the architectural beanstalk.  This is a long breakfast.  You may remember from yesterday, that I am in conversation with a Malaysian man in his late twenties, while his girlfriend is still ‘eyes down’ focused on her smartphone.  She is listening to us, however, and I am glad to say is amused.  The guy, Terry, is a somewhat unconventional manager of a company supplying security equipment.

God has a sense of humour

Can you believe it (and you probably won’t) I have unwittingly chosen to speak with someone who has locked his smartphone in the hotel security box.  He tells me he wishes to have a ‘real holiday’ and has left his itinerary with his personal assistant.  “She can call and leave a message with the hotel, should there be a need to speak with me directly.”  He has no Facebook profile, and no Twitter account, and his friends think he is weird.  How could I have spoken to someone so apt?  I tell you, God really does have a great sense of humour.

Most of us have another essential ‘organ’

What if we were to disconnect?

I wonder whether a more ‘apt’ punishment for, say, first offenders instead of prison would be literally to disconnect them from every possible technological device?  Imagine… just a whiff of their DNA would disable the offender’s use of any smartdevice.  I wonder, whether these individuals, denied technology, would ultimately achieve higher and more elevated states of consciousness ― that as they ‘escaped’ from the ‘prison’ of 24/7 connection, they would adapt, re-condition themselves again, back to disconnected new circumstances, and so, get familiar with being free.  Classically conditioned to being free ― if you like.  I anticipate that these individuals could begin to experience elevated levels of consciousness and intuition, ― with no access to distraction.  Could it be that what would be held to be a violation of human rights ― zero access to the world-wide-web, and zero tolerance of any smartphone device ― would ultimately ‘connect’ them to a much more powerful and empowering force for good, for guidance, and for personal, and community service?

Would these individuals spiritually take-off?

Perhaps these individuals would assume levels of connection on a par with the early Christian contemplatives, like St John of the Cross?

Going back to basics, and returning to handwritten letters, could take these presently ‘imprisoned souls’ above and beyond the sixty fourth floor of the tallest skyscraper.

In Hong Kong and Taiwan the smartphone is king and queen.  Terry tells me “The routine of many dining couples within the driven commercial world at dining hours goes something like: ‘What are you having?’  ‘Let’s order’.  ‘Are you finished?’ ‘Let’s go’.”

He says, and I hardly believe him, “When both partners are on their smartphones sitting in a restaurant, they can actually text each other rather than speak”.  Yes.  My mouth is agog!  I remember being horrified for a client (and this was years ago), whose boyfriend had finished with her by text message.  At the time, I imagined this was a one off aberration.  Now this is par for the (unromantic) course.  And on another occasion I was abashed that co-workers sitting desks away would text to enquire as to whether their colleague was going for lunch?

Yes, okay readers, I have to get real!

Is your Master a Mobile?

Terry expands on the routine and the unrelenting checking.   “Every day at the morning briefing I ask my staff to turn their phones off.  I ask for three minutes of their time.  Indeed, I make it compulsory to turn their ‘phones off.  The best I may get from some of them, is a switch to ‘vibrate’.   “Boss, boss, we listen they say”.  My Assistant Manager will send a text saying “Boss is angry”, and I will note the staff member re-positions himself in the chair attentatively.  They have a whole raft of plausible excuses for not turning off their ‘phones of course”.

Terry speaks in an easy, reflective way, and I imagine him to be a young boss of talent ― and most certainly a young man of balance.

A thoughtful coach may ask, ‘What is the worst that can happen if …’

I was in New York well over a decade ago, when I first encountered a flight of travellers, each sitting, at a PC in an internet cafe.    Sir Stelios Haji–Ioannou had taken a brief foray into ‘Easyjet’ internet cafes.  Unaware of how dominant email communication would become, I pondered my own back-packing days.  I was thinking that New York, a city at the epicentre of life, was ‘out there’ waiting to be discovered and they were in there ― a seemingly ‘orange’ cafe.  In my view they were losing the limited time they would have to discover the town.  (I was there only to locate the place and rendezvous later.)  I stepped out into Times Square and thought of ‘On the Town‘.

See for yourself.  Can you really imagine those guys, three sailors, with 24 hours of leave from the ship, stopping to check their emails?

Where was I?  Bangkok … and breakfast, that long breakfast…