Sandy the Superstorm and other CNN ‘News’ stories 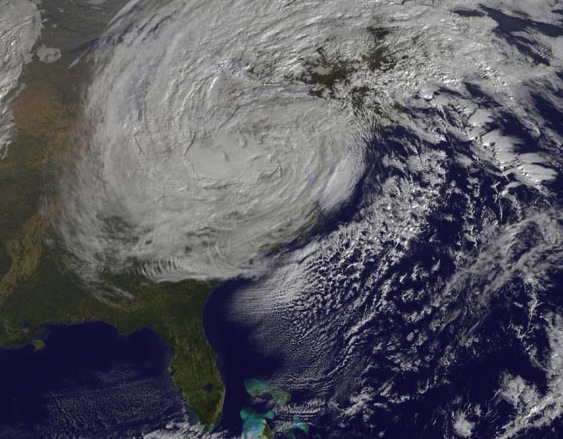 A hurricane by any other name?

benign names as Katrina and Sandy?  ‘Katrina’ did her damnedest in New Orleans.

CNN: “Sandy has been wrapping up all the headlines, but who is this kid?”

‘Sandy’ — well, I imagine a casual, pony-tailed, with maybe a fringe (“bangs”), a friendly-looking, collegiate kind of gal.  Now I find that she has wreaked such devastating havoc, while speeding at 80 miles an hour onAmerica’s East coast, that one would think she’d be on a restraining order and in a remand home for wayward lasses, by now.  But no, she just walked on by, leaving American’s East-coast moms and pops to clear up the mess.  Well, that’s an understatement.  Let’s say, to clear up a catastrophic super-mess!

How come a hurricane called ‘Sandy’ got re-branded en route?

You see ‘Sandy’ started out as a hurricane, and then got re-named as a super-storm.    I am watching CNN and I am confused.  “Hurricane ‘Sandy’ is no longer a hurricane.  It is a superstorm.”  Her speed let up a tad before she made landfall and so she got re-packaged and down-graded in transit.

How can a storm be super?

There can be a vast divide between American English and British English.  The prefix “super” generally is used in English as an intensifier. Eg supersonic. supernatural, supermodel, supercharged, superhuman.  In truth it does not have a connotation of good, except when used in isolation. “That’s super!”

Students of English across the USA and worldwide will have asked, “But why is this bad weather super?”

Is there a reasonable didactic response?   I think not.  But this is America.

“Super is another word for big (in American English).  I mean super-big.  Let’s even say humungous.”

“Miss, what does humungous mean?”

Have we done something wrong? Is this all down to climate change? Is CNN right … rather, is CNN correct? CNN, as is oft repeated, the ‘foremost news-channel in the world’. Surely they are right…. Rather, surely they are correct.

Did you notice how CNN fanned the flames of reportage and disaster?

As the storm raged on the East coast I studied the CNN news coverage and got ever more wrapped up in the reporter’s confusion techniques.  What did I learn?  What I learned was how CNN’s underlying thrust was to fan the flames of reportage and disaster.

Fires were raging at RockawayPark: “… some thing to do with power lines blowing in the storm.” “And the danger is that [the fire] will continue to spread with the embers blowing in the wind.”

Folks were being warned, “Don’t put your First Responders in danger in this superstorm.”

“It appears there are no casualties in this area and this is really good news.” Quoted a reporter on the ground.

Back at CNN, “But there are inconveniences…” implored the reporter back at HQ.

“CNN is live on the ground.  Expert technology to give you a better understanding of how it is adding up.”

InManhattan, superstorm ‘Sandy’ was described as “terrible weather”.  The reporter on the ground noted, “Clearly inManhattanthe water is receding.” This seemed not to go down well at HQ.  “The water is … over there.  The water is about fifty yards away.”  [Believe me]… “the water is there.”

“How’s the loss of life and other things?” asked HQ.

“… the wife had to convince the husband to get out of here and go under cover.”

“The water is expected to push up… and it does.”

In New York a crane dangled as though balanced on the crest of superstorm ‘Sandy’.

The reporter said in earnest…  “The fear of course is that the crane could fall to the ground at any moment.  Let me tell you about this crane ― a construction crane dangling on a building overManhattan.”

And over to Atlantic City…

“As I was listening to you, the rain has picked up… a driving rain.  The water is above my knee.”  Personally I thought the chap had moved to position himself in a pot hole.

“The water is getting deeper and deeper… You feel like you just want to get out of here.  It is a raging river.”

“Nobody is going to notice the devastation until they have got their eyes on the ground”.

“They have no idea what they are going back to.”

Has CNN graduated in the ‘bleeding obvious?

Do you also remember the Python-sketch with the character who always talked abut the weather, and particular precipitation?  “… so much water… many feet of water…”

“Good morning everybody!” cheers the Newsreader in her brightest chirpy voice.  “We are covering a major story about a superstorm, and special coverage of superstorm ‘Sandy’ begins right now!”

Is CNN a news channel, or is it really the Number One International TV Story-teller in the World?

I am confused and non-plussed by the story-telling way of the news reporters and readers, as there is a total mis-match between the sing-a-long twittering and real and true, gravitas of what has happened on the East coast ofAmerica.

Why not join in?  Have a go at ‘mouthing-along’ with a newsreader on CNN.

Let me invite you to join in and to speak aloud the words of one of the newsreaders, in unison.  You are about to discover how difficult it is, and how unnatural their spoken delivery is.

Today on CNN, “Sandy crashed in to the election campaign”

And the good news is, “‘Sandy’ the superstorm has allowed President Barack Obama to demonstrate his stars and stripes!”

I’ll be back with more commentaries, musings, and further personal analysis of CNN.  Meanwhile keep practising your news- speak rhythm.